THE origins of THE systems approach

Last month I reread (and blogged) Churchman’s ‘The Systems Approach’ (1968) and was surprised to see that between the lines it contained practically the whole of the dialectical systems approach (the systems approach) as it finally took shape in 1971 (The design of inquiring systems) and 1979 (Enemies of the systems approach). In ‘The Systems Approach’ Churchman describes in fact how the dialectical systems approach emerged from the scientific systems approach (the “systems approach”) and operations research, something he had been working on very successfully from 1941 onward and the 1950s in particular, culminating in his ‘Introduction to Operations Research’ (IOR, Wiley, 1957; co-written by Russ Ackoff and Leonard Arnoff, one of the big guys behind Ernst & Young). Interestingly and speaking in a general sense, many of the ideas of ‘The Systems Approach’ of 1968 can be traced back in one guise or another to ‘Introduction to Operations Research’ of 1957. As usual, the paragraph numbers of this post refer to the numbers in the concept map. Or perhaps I should say concept enchilada. 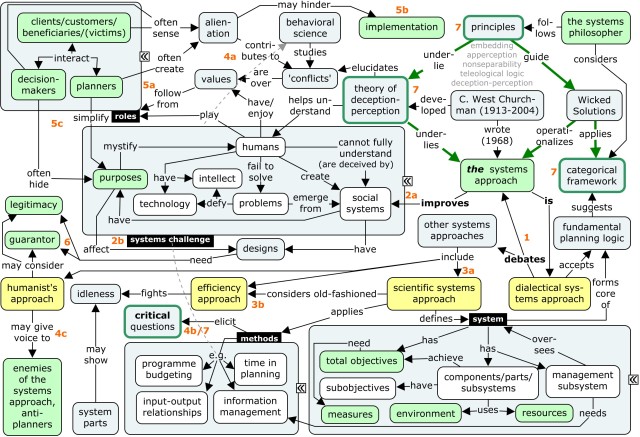 2. Social systems      … are created by people. They represent our efforts at creating or increasing value by collaboration in a broad sense. The value thus created is to be enjoyed or treasured by the same or other people. People cannot just create any social system in any way deemed most efficient or best by some other one-dimensional standard, because social systems are created subject to constraints, part of which belong to the complex systems of valuation and exchange underlying the social systems. As a result of all these complexities and the fact that our social systems (and their components or higher-order systems) are many and tend to overlap and conflict with each other, problems emerge that we find hard, not to say impossible to address. These problems defy our – sometimes formidable – intellect and technology, both in fact the product of some of those same social systems (intellects have to be trained to be able to do their job, which is perhaps the whole point of this post and its subject matter). We think and exchange ideas, but we find it hard to come up with effective solutions. Businesses go bust, peoples go to war, religions harm or kill non-coreligionists, dictatorships flourish to the detriment of the suppressed, we are unable to root out the classical scourges of hunger, poverty, ignorance and disease, while overpopulation and climate change threaten the planet as a whole. We simply cannot fully understand and are often deviously deceived by the systems of our and other people’s creation.

3. Science to the rescue?      The scientific systems approach has its roots in operations research, which was an effort to let scientists improve Second World War efforts in any possible way, e.g. by using statistics or simply by being bright and innovative, asking “stupid” questions. Churchman was in fact a philosopher, but he, too, became usefully engaged in operations research from December 1941 (the Pearl Harbor attack was on the 7th) onward and rode the wave of its success in corporate America of the 1950s, at the same time contributing enormously to it. According to some, operations research was initially based on insights from administrating the erstwhile global British Empire, a complex affair indeed. Churchman, being an American, rather traced its roots to the efficiency approach of the early 20th century, also known as Taylorism, which was one of the earliest attempts to apply science to the engineering of processes and to management, e.g. in the production of Ford’s Model T (1908-1927). The same techniques were used in the production of thousands of Liberty ships and B-24 bomber aircraft, so it is not surprising that management guru Peter Drucker credited scientific management with winning the war (Beatty, 2002). Out of the efficiency approach grew the scientific systems approach of the management scientist, who increasingly made use of modern computers, also invented during the Second World War, primarily to calculate ballastic missile trajectories for the US Army (McCartney, 1999). Operations research discovered the concept of the system as key to the problems we are dealing with (Churchman et al., 1957). So, according to Churchman (1968), a system can be defined as being composed of parts working towards an overall goal (see bottom right part of the concept map for other system facets). Operations research (or the scientific systems approach) also developed a number of methods, techniques and tools to deal with systems, including program budgeting, input-output relationships, management information systems, time-related tools (for more information, see previous CSL4D post).

5. All participants count      Churchman et al. (1957, p. 110) point at the need to take the objectives of other participants in the problem other than the direct decision-makers into account. Their relevant interests should be determined, because an understanding of the way they are affected “is essential to a complete understanding of the problem. Moreover, the success in applying any solution […] depends on the way it is received.” (IOR, p. 111). This points to the critical consideration of ‘implementation.’ Ultimately, these ideas led Churchman to the insight that four key roles can be distinguished in the systems approach: clients (because they perceive the value), decision-makers (because they commit the resources to produce the value), the planners (because they plan how the value is best produced), and the systems philosopher (because he understands how the various interests of the participants can best be taken into account, i.e. using a soft systems perspective, including a hard systems perspective). These roles can be distributed among different participants in different ways. Participants, whether as a group or individually, can play different roles at different times or even at the same time. Planners must take care not to alienate the decision-makers or clients in the planning process. Decision-makers must acknowledge that they tend to hide the purpose of interventions, whereas planners should be aware that they often seek to oversimplify the purpose. And there are many other considerations that cannot be easily dealt with using management science.

6. More critical questions      … can be brought up by the approaches of the humanist and the anti-planners, who are wary of rational plans in general. Humanists emphasize freedom (of or from religion and other dogmatic planning systems), dignity, and privacy, and that planners or decision-makers lose sight of deeper values of morality (ethics) and esthetics. Some of the critical questions go against the (dialectical) systems approach and its proponent, the systems philosopher. A particularly powerful anti-planner is the so-called ‘excellent’ manager↗. Apart from those, Churchman had two key concerns: legitimacy and that of the guarantor. Starting with legitimacy it is clear that a system or intervention can create or strengthen both positive and negative values. Those experiencing negative values could be termed the ‘victims’ of the system. It is obvious that these cannot be ignored without further ado. A second, related concept is that of the guarantor. Systems or interventions may not always work for the better, even if they are designed with the best intentions (think of “The road to hell is paved with good intentions”), so there is a need for asking the question what guarantees have been used or concepts of guarantees have been applied to make sure the intervention does as intended or claimed.

7. So what have we learned?     Churchman tried for a long time to make sense of systems (military operations, businesses etc.) by applying the scientific systems approach (esp. in the form of ‘operations research’), but no matter how hard he tried, critical(!) questions kept popping up and were beyond the capacity of the management scientist to answer. The only rational way out was a dialectical systems approach, using the perspectives of different participants (or stakeholders in a broad sense). This idea is based on a set of principles, including the principle of apperception↗, the principles of deception-perception, the logical principles underlying a purposive system↗, and the fundamental philosophical principles for the inquiry of social systems↗. In the end Churchman designed a critical framework of categorical considerations (the green concepts in the concept map above. The concepts with the dark green lining are the key ideas that drove the design). These considerations must be taken into account when designing any system, if you accept Churchman’s theory of deception (see below), including its principles. Churchman gives a good description of this framework and some of the critical questions that could follow from its application in Chapter IV of “The systems approach and its enemies” (1979). This blog also contains several descriptions of it, see e.g. here↗. A relatively simple version of it is Ulrich’s critical heuristics, which has served as a basis for Wicked Solutions, see also at the top of the right sidebar.

R3: requirement of reiterative review       From the above theory of deception follows the requirement of continuing or reiterative review for all designs of social systems. For good order’s sake, the term ‘social systems’ refers to what is commonly known as ‘social institutions’ and includes administration, business, communication, development, education, finance, geography, history, policies, programmes, projects, religions (why not?), armed forces, international agreements etc. It is not for me to say how this reiterative review should be shaped, but in a previous post I suggested that the dialectical systems approach could improve: (1) initial planning; (2) ongoing communication (in all its forms, including leadership, debate, early feedback etc.); and (3) intermediate and final evaluation – if there is such a thing as ‘final’ when dealing with something ‘continual’. At the end of a previous post I suggested a number of topics for research, some of which having a bearing to this requirement of reiterative review. This would be in addition to whatever other systems methods and management techniques may be applied. Unless somebody has a better idea than Churchman on how to develop a comprehensive systems approach, there is no alternative to systemic dialectics as an overarching systems approach. It may not be a supersystem approach, but it is most certainly “not a bad idea.” (TSA, p. 232).

1 Response to THE origins of THE systems approach