Notes to video interview with Churchman

In one of my last blog posts I added a link to my transcript of a two-hour video interview with C. West Churchman, a well-known American systems philosopher. I said that the interview could serve as an introduction to Churchman’s dialectical systems approach. Now, perhaps that is a bit too optimistic. So I figure I have to add a few notes to the first 30 minutes to make sure such an introduction works out as more than a passing acquaintance. It is also an opportunity for myself to check if I haven’t overlooked anything in the rich thoughts of a great systems mentor. The notes to the first 30 minutes of the transcribed video interview are available as a PDF from here. It is 5 pages in all and contains 3 rather interesting concept maps, including a novel one, which I baptized “Concept map of Churchman’s categorical scheme for the inquiring system of a dialectical systems approach”. Below concept map is described in considerable detail in the PDF. 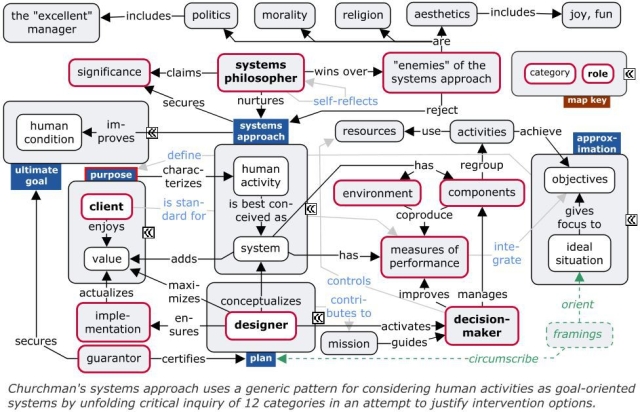 Systems, systems and dialectics       How systemic is it all? Very much, I would say: (1) First of all there is the system itself with all its inter-relationships, which could be just about anything. A few examples were mentioned: postal system, business, government agency, education system, international development system, capitalist system, local food production system, a project, energy system, global climate system. As long as it has humans in them, it’s a system in the Churchmanian sense of the word, a social system, an organization of sorts. We also have messes in the Ackoffian sense, which are systems of systems interacting, e.g. the climate-energy-human reproduction-economic-international politics system. Or – as pointed out by Harold Nelson in The Design Way – simple ones, like the stone-age fire system with all its complexities of collecting wood, keeping the fire going, all sorts of smoking, cooking and heating aspects etc. (2) Then there is the inquiring system, which tries to look at the system as a whole, as described in the concept map; (3) Next there are the modelling systems, used in the designer role, but needed to communicate between the other relevant role players. Some of the modelling systems may well be specific forms of systems thinking as well. Often models are partial models of the system or models of part of the system. I think patterns and structures could be said to fall in this category of systems. The fun thing about patterns and structures is that one set of them for one system can serve as a ‘model’ for another system. This is actually the rationale underpinning systems thinking generally. This idea is put to good use in the systems archetypes of Senge’s Fifth Discipline (see Kim 1992), but examples abound in systems thinking, the simplest being the input-output model; (4) Finally there is the dialectical system to determine the system boundaries (in a broad sense, so also looking at patterns and structure). It makes use of the perspectives of stakeholders, broadly defined as those most concerned by the system in a variety of roles, the main ones being client/beneficiary, decision-maker/manager, designer/planner, systems philosopher/thinker. The dialectical system makes use of the inquiring system and different models, formal or informal. There can be no dialectic without good communication and without looking through each other’s eyes, i.e. placing oneself into a different role. There is no such thing as a perfect dialectical system. Yet, imperfect ones may still yield satisfactory results. It is possible to expand on the subsystems (e.g. we could put the designer in the context of a design system, the decision-maker in the context of decision-making or management system etc.), but the four types just mentioned seem to cover the essence of it quite well, from the dialectical systems approach point of view, that is.

The word ‘system’      …. seems to confuse and put off people. As Churchman explains in the video interview  of 1987, its use for ‘social systems’ such as organizations, projects or nations came naturally in the early 1960s, when people were talking about systems a lot: computer systems, administrative systems etc. Churchman, like everybody else, was just expanding the applicability of the word to, well, systems generally. In addition, the use of the term ‘The System’ for “prevailing social order” is from 1806. Its Greek origin (see here) makes it suitable for most major languages, from Portuguese to German or Russian, with the exceptions perhaps of Chinese and Japanese. Now, what is a system? According to Churchman it is ‘things hanging together’. But he doesn’t mean the solar system, but human or social systems. So, it is actually ‘people and things hanging together’. But that too is incomplete, because systems are designed by people with a purpose. So the full definition of a system in the Churchmanian sense is ‘people and things designed to hang together for a purpose‘. The systems approach was developed (or designed) to improve the system design when it turns out not to function properly. The term ‘approach’ was preferred because of its double meaning of: (1) a particular way of handling a (problematic) situation not necessarily implying a final solution; and (2) approximation, i.c. the approximation of an ideal situation (see concept map). The term ‘systems approach’ is also used in psychotherapy (see e.g. Bauserman and Rule 1995). There are parallels, but it has nothing to do with Churchman, although he had a particular liking for the work of Carl Gustav Jung. There are also interactions and influences as described in Part Thirteen of Bauserman and Rule’s brief history, where they mention Von Bertalanffy, Norbert Wiener, Gregory Bateson and Erickson. If we speak of The systems approach in a Churchmanian context, we mean the dialectical systems approach of above concept map and everything it entails.