To the unsuspecting eye, Churchman’s systems approach may seem to have popped up quite unexpectedly in 1968, but it has roots in his writings well before that and in his consultancy work long before that again. I am currently close reading his Challenge to Reason (CR, 1968) in which several older papers are published, some of them dating back to 1962. Chapter 7, mysteriously titled ‘the X of X’, is described as a featured presentation at the Ninth Animal International Meeting of The Institute of Management Sciences (TIMS), jointly with the Econometric Society, at Ann Arbor, Michigan, September 11, 1962. I will venture a summary here. The paper can be downloaded here or here. By what pathways “the x of x” was seminal remains to be determined in detail. For some preliminary ideas, see the last paragraphs of this post.↗

The X of X       Humans created but do not quite understand their own decision-making nor the systems that were created by their decisions. It is the business of decision-making to handle this complexity and uncertainty of the companies, universities, and governments so created. To do so, we humans must understand ourselves, which requires self-reflection. What is it that we are doing and why? On p. 113 Churchman writes that “the successful outcome of the problem of self-reflection is to find a minimum loop that leads from x to x.” On the pages before that he has shown how that ideal runs into difficulties. 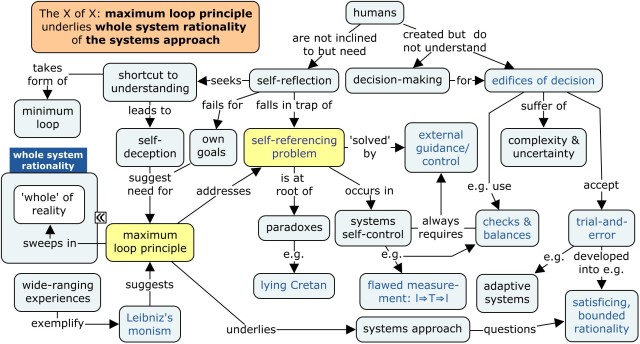 Self-referencing and self deception    The minimum loop principle seeks to follow the shortest possible route to maximum understanding. One of the options is to use logic, but this can be shown to get us into the self-referencing problem. Not only does logic not lead to interesting insights because of its often tautological nature, but it also ends up in intractable paradoxes such as that of the ´lying Cretan´ of Epimenides (around 600 BC). A similar phenomenon occurs when we seek to create self-controlling systems. Churchman gives a few examples, including the problem of measurement (something he learned from his philosophical ‘master’ A. Singer Jnr.) and the concept of checks and balances in USA government. No matter how hard we try, there will always be a need for external guidance or control.

Trial-and-error     Because good, effective solutions are hard to come by there is a lot of trial-and-error in handling complexity. So-called learning organizations attempt to learn from their mistakes. Approaches involving satisficing and bounded rationality can be used to suit particular levels of aspiration (Simon, 1955). Generally, people are happy when “it works”. How do we know it works? Because there are “no complaints.” Why are there no complaints? That’s a question we generally consider too difficult to answer.

The maximum loop principle (MLP)      … holds that “for a mind to understand itself, it must understand everything.” It is Churchman’s interpretation of Leibniz Monadology (1714). As I wrote in a previous post CSL4D post : “His monads (or “inquiring systems” according to Churchman) use contingent truths and imagination to create ever expanding competing fact nets. These competing fact nets represent different parts or aspects of the whole of reality. The confrontation will falsify all but one fact net, which is at that moment the best approximation of the absolute truth about reality available. Leibniz is not in the least concerned about origin of the contingent truths, whether they are real or imagined. The fact net competition will sort it out.”

Sweeping in    We can conclude that what the MLP does is ‘sweeping in’ the ‘whole’ of reality. The ‘whole’ is a bit much, so in practice it is restricted to be the whole in as far as it is ‘relevant’ to the system under consideration. This restricting is not an easy matter and should be subject to what is known as a ´boundary critique´ (this is my addition, not Churchman’s). If well executed it can be said to exemplify what Churchman calls ‘whole system rationality’.

The systems approach        In ‘the x of x’ Churchman does not speak of the systems approach, but he calls it a (‘naïve’) “system-science approach” (1962), instead. It is important to note that ‘system’ here means human activity system, which differs from, say, a physical instance of transportation such as a railroad system. In ‘the x of x’ Churchman indicates that he was already a ‘systems approacher’ while working as an operations researcher in the 1950s, consulting with managers in health, law, education, defense, production and transport. This means that the systems approach was applied 10 to 15 years before it became known as such from 1968 onward.

Utility of the systems approach       Churchman (CR 115) in his own words: “The highy experienced railroad managers were correct in saying that what I could contribute would be naïve. They were wrong, however, in saying that a naïve system science approach to railroads was useless. The approach provided another way of looking at a railroad—as a system, not as a physical instance of transportation. Since then, I have had the same experience with managers in health, law, education, defense, and production. They all want to know how an operations researcher in six months, or a year, or ten years, could ever hope to “solve” their problems. Of course, he can’t, for he is no more of an expert than they are about the really fundamental problems. But he can provide a link of the maximum loop, a way to reflect, that no profession by itself can ever hope to provide.”

How to learn the systems approach       Over the years, Churchman has been describing the systems approach in all its theoretical detail, but he never produced a methodology. Instead, he insisted on the application from first principles, which he all described. Werner Ulrich, with Ian Mitroff one of the most widely known PhD students of Churchman, is one of those who gave the approach more operational bite with his critical heuristics.  He introduced the concept at various universities in the United Kingdom, where it is now used frequenty in combination with other systems methods. It came to the notice of the main author of “Wicked Solutions“, Bob Williams. Wicked Solutions was written as a practical and easy introduction to the systems approach or critical heuristics. It is available from Amazon and as a PDF.

Simon, H. A. (1955). A behavioral model of rational choice. The Quarterly Journal of Economics, 69(1), 99–118. Retrieved from http://digitalcollections.library.cmu.edu/awweb/awarchive?type=file&item=33523